“No country in the world has yet uprooted the deep systems of racial inequity burdening communities of African descent — the result of centuries of discrimination, dispossession, and enslavement.” –Dr. Natalia Kanem, Executive Director of the United Nations Population Fund on August 4, 2021

After years of deliberation, on August 2, 2021, the United Nations General Assembly unanimously adopted a resolution establishing the United Nations Permanent Forum of People of African Descent. The move comes after a years-long deliberation process for the creation of a platform to improve the lives of people of African descent and address the painful legacy of centuries of racial subjugation and global enslavement.

In this landmark decision, all 193 member states of the General Assembly moved without a vote to unanimously create the Forum, a 10-member advisory body that will work closely with the UN Human Rights Council. The body will serve as a consultative mechanism for people of African descent to contribute to the elaboration of a UN declaration that will create momentum towards creating a legally binding instrument that promotes and protects the rights of people of African descent.

Negotiations on the establishment of the Forum have been ongoing since November 2014, when the Assembly first launched the International Decade for People of African Descent (2015-2024). Deliberations among member states and consultations with experts and other stakeholders persisted for years, and in December 2018 the General Assembly decided to establish a permanent forum for people of African descent. The body has been mandated to identify challenges and opportunities in advancing the full political, economic, and social inclusion of people of African descent in their communities — as equal citizens with equal enjoyment of human rights.

The unanimous decision to create the Forum comes just weeks after UN High Commissioner for Human Rights Michelle Bachelet published an urgent report calling upon States to adopt a “transformative agenda” to eradicate systems of institutional racism. Bachelet’s report, prompted by the police killing of George Floyd in 2020, investigates a litany of human rights violations suffered by people of African descent in police interactions. On the heels of Bachelet’s sobering report, the formation of the Permanent Forum reflects a positive step forward in building a bridge towards justice and in the UN’s mission to combat racism, xenophobia, and intolerance.

Part of the long road ahead to the recognition, justice, and development of all people of African descent is challenging today’s young leaders with discussing and tackling the myriad of issues confronting communities of African descent. In recent months, the world has seen some of the largest social movements protesting institutional racism, police brutality, and calling for the guarantee of equal human rights to all people of African descent. From the Black Lives Matter movement to the End SARS movement in Nigeria, police brutality and the abuse of marginalized communities have commanded international attention.

At NHSMUN 2022, delegates will be tasked with engaging with these serious and complex issues. Delegates will have an avenue to discuss the struggles that people of African descent face in many of our committees and topics this year, including SOCHUM’s topic on police use of force, and the UNHRC’s topic on alternatives to incarceration. Furthermore, in the Commission on Narcotic Drugs, delegates will research and discuss the implications of the opioid crisis in North America, while in the UN Security Council, delegates will explore the intricacies of West African terrorism. At NHSMUN, it is our hope that through the simulation of these committees, students will foster insightful discussions that will allow them to reflect on how these global issues manifest not only abroad, but in their own communities as well. Through NHSMUN’s extensive topic portfolio, students will learn that these are not just imagined issues on paper, but real issues that affect countless lives every day. 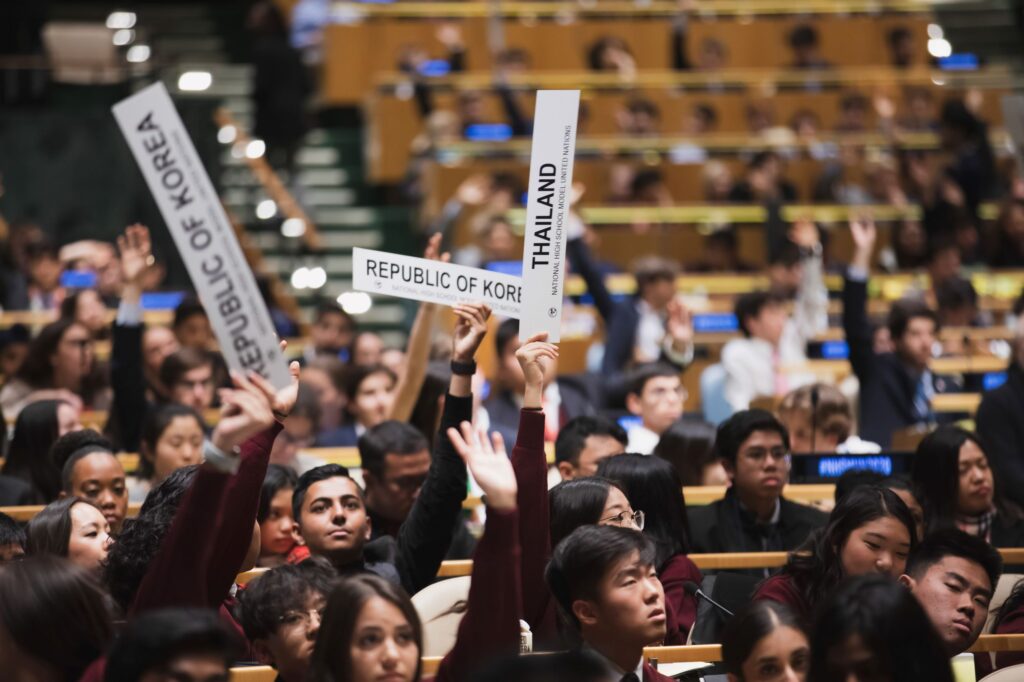 What role can disarmament play in both the international community and your own?    In honor of International Day for the... read more

Background Guides for NHSMUN 2022 are here!

The official NHSMUN 2022 Background Guides are here! After a rigorous months-long process of vetting, researching, and writing about... read more

June 8th is World Oceans Day, and the 2020 theme is "Innovation for a Sustainable Ocean." In conjunction with Sustainable... read more

Part of what makes NHSMUN the world’s premier model UN conference is its deep immersion into the UN system.... read more

Click here to download the NHSMUN 2022 Assistant Director Application   Planning is already underway for NHSMUN 2022, and we are... read more

I know I'm repeating this, but I'm serious--this program and these people I've met have exceeded my expectations from... read more

“We need your help to prevent UNGA 76 High-Level Week from being a super-spreader event.” -Linda Thomas-Greenfield, U.S. ambassador... read more