NHSMUN is excited to be recognized by the UNHCR, the UN Refugee Agency, as one of the winners of the 2020 MUN Refugee Challenge. NHSMUN 2020’s Social, Humanitarian & Cultural (SOCHUM) Committee submitted the winning resolution, which was recognized as one of two Best MUN winners in the category of “Countering Toxic Narratives.”

While NHSMUN is honored to be recognized by the UNHCR for this achievement, the true recognition belongs to the NHSMUN 2020 delegates, who distinguished themselves among the 20,000 total students in 75 countries who participated in the challenge. NHSMUN has long been recognized as having the strongest substantive program on the Model UN circuit. This recognition from the UNHCR is not only a testament to how talented NHSMUN’s students are; it is also an affirmation that NHSMUN’s committees truly feature some of the highest-level debate available to young learners today. We extend our congratulations to all of our students, teachers, and schools for this recognition, and most importantly, for making NHSMUN such a special experience!

From the UNHCR Press Release:

Throughout 2020, more than 20,000 students in 75 countries took part in the MUN Refugee Challenge. And over 100,000 students learned about forced displacement through their peers and the UNHCR and refugee guest speakers who joined their MUN.

The resolutions that emerged from these debates were put before a jury composed of UNHCR members, young refugee leaders and independent experts. The resolutions were assessed according to the students’ knowledge and understanding of the topic and the quality and implementability of their recommendations.

The winners for this year’s Challenge were officially announced on December 9th, 2020, during the closing session of the High Commissioner’s Dialogue on Protection, in the presence of policy-makers, refugees, experts and scholars. 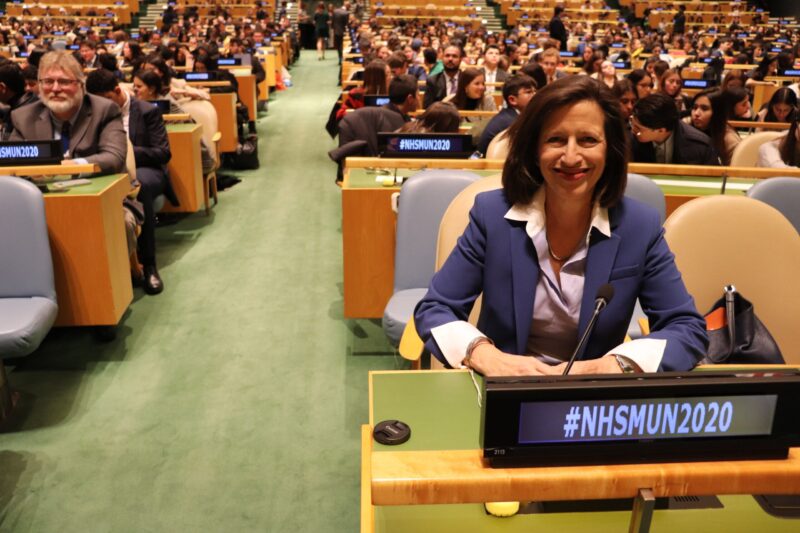 UN Under-Secretary-General for Global Communications, Melissa Fleming, attends the opening ceremony of the 2020 National High School Model UN, which brought together 5,000 students to talk about the importance of protecting refugees and resulted in a resolution to address hate speech about refugees.

As always, NHSMUN 2021 will host a diverse range of engaging committees that will fully immerse students in the... read more

NGO and Youth Involvement at COP26

From October 31 to November 12, global leaders converged in Glasgow for the COP26 summit. This meeting was the... read more

NHSMUN is pleased to join the United Nations to mark Earth Day 2021, calling for action on climate change... read more

“We need your help to prevent UNGA 76 High-Level Week from being a super-spreader event.” -Linda Thomas-Greenfield, U.S. ambassador... read more

The NHSMUN 2020 committee topics have been announced! CLICK HERE to access the committees and their topics. Each year,... read more

What role can disarmament play in both the international community and your own?    In honor of International Day for the... read more

"The 75th anniversary of the United Nations falls in the middle of a global pandemic. Our founding mission is... read more

Just like that, 2021 is coming to an end. After a year filled with uncertainty, physical distance, and many... read more